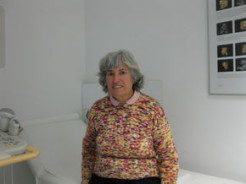 Since 2003 I had suffered from incontinence. This depressed me very much – I could not go anywhere, to go out with my friends, my life changed. I had leakage when I was going in the streets, when I was talking, when I was laughing…

I was appointed for operation in 2004 and I was thinking that this would help. Only a month I felt well but afterwards everything started all over again.

There were times when problems were fading but after they got back again much worse. This problem worried me so much that I was completely desperate.

I searched for some information on incontinence and I have been everywhere – in Sofia, Plovdiv and other places. They all told me that they would not undertake such operation again because the success is not sure.

Finally with the help of my daughter I contacted Hill Clinic where I found a solution for my problem. The operation was on 23rd of April 2010 and the symptoms disappeared the same day – I could get up form the bed without feeling urge urine leakage.

Now I think that future is in front of me and I feel the same way as I felt before suffering from incontinence. Aging is also an important factor but I life is totally different when I do not have such a problem. I am so happy and pleased, I definitely feel like a new person. I can’t believe it’s me!